Kia of Hickory Hallow – Seltos
Kia has steadily grown its small car lineup, and notable among the additions is the Seltos. The 2021 model year marks this nameplate’s first, and it sticks to Kia’s penchant for attractive sheet metal, upscale interior design and materials, and enticing vehicular personality. The 2021 Kia Seltos is available in the following variants: 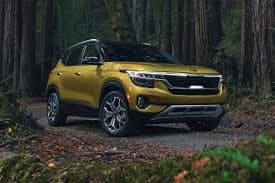 LX: The Kia Seltos LX comes with cloth-trimmed seats (which seat up to five people), and for a vehicle classified as a subcompact crossover SUV, there’s a lot of interior space. More specifically, the Seltos has the largest cargo hold in its class, with 26.6 cubic feet between the rear seats and the liftgate and a maximum of 62.8 cubic if you fold down said seats. Remote keyless entry allows you to securely unlock and lock the doors with a key fob. For infotainment, the Seltos uses an 8-inch touchscreen to integrate a six-speaker AM/FM stereo system, Bluetooth wireless technology for hands-free phone calling and audio streaming, Android Auto and Apple CarPlay smartphone integration, a USB port for hooking up mobile devices, and Siri Eyes Free. A rearview camera is the main driver safety aid with its ability to produce a video image when reverse-driving at low speeds. Two frontal airbags, two side impact airbags, and two side curtain airbags are installed throughout the cabin for deployment when there’s a crash. With its drivetrain and powertrain configuration—combining a 146-horsepower 2.0-liter four-cylinder engine, a continuously variable transmission, and an all wheel-drive system—the LX provides good acceleration performance, a smooth ride, and above-average fuel economy.
S: The S stands out from the other trims in that it’s the only one that gives you the option of a front-wheel drivetrain. With engine power pushed to just the front wheels rather than all four wheels, fuel economy peaks at 29 mpg in the city and 34 mpg on the highway. These are some of the best numbers in the subcompact crossover class. Kia introduces a touch of luxury and sportiness with a leather-wrapped steering wheel and partial synthetic leather seat trim with blue contrast stitching. In addition, joining the rearview camera are the following driver-assistance technologies:
• Forward collision assist
• Driver attention warning
• High beam assist
• Lane departure warning
• Lane following assist
• Lane keeping assist
EX: The EX represents the Seltos’ mid-level trim. Here, the partial synthetic leather trim gives way to full synthetic leather upholstery, the front seats gain front-seat heating, and the driver’s seat gets 10-way power adjustability. Remote keyless entry is upgraded to a smart key system for unlocking doors by simply having the key fob, rather than pressing buttons to do so. The ignition next to the steering wheel is replaced by a push button for more convenient engine starting. The climate controls are upgraded to automatic operation, and two USB ports are added for charging mobile devices. Driver assistance enjoys a boost with the introduction of a blind-spot monitoring system with rear cross-traffic assist.
S TURBO: True to its naming, the S Turbo ditches the 2.0-liter four-cylinder for a leaner but more powerful 1.6-liter turbo-four that outputs 29 more horsepower (i.e., 175 horses) for improved acceleration. What’s more, the turbo-four is hitched to a seven-speed dual-clutch transmission for better performance. On the other hand, at this level, the Seltos reverts to partial synthetic leather and loses driver-side 10-way power adjustability.
SX TURBO: Although the SX Turbo has the same turbo-four machine as the S Turbo, it’s the range-topping Seltos model. As a result, full synthetic leather upholstery and driver-side 10-way power adjustment return, and the SX Turbo stands out from the other models with the following features:
• Auto-dimming rearview mirror
• Eight-speaker Bose premium stereo system with a sound-connected mood lamp (in place of the six-speaker setup)
• Navigation system
• Trial subscription to SiriusXM Radio
• UVO link for remote connectivity
• 10.25-inch touchscreen (instead of the 8-inch)
• Adaptive cruise control
• Highway driving assist