Kia Hickory Hollow – 2021 Forte
Even with crossovers and SUVs continuing their dominance in the automotive world, long-running nameplates like the Kia Forte are still available for those who are fine with a small, compact sedan that looks great and has a healthy number of standard features. The 2021 edition of the Kia Forte has no changes from the previous model year, which is fine; it still remains one of the top compact cars to get. The 2021 Forte is split into five trim levels, which are: 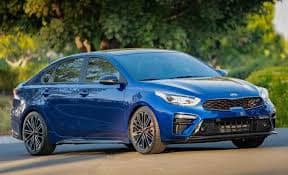 1. FE
2. LXS
3. GT-Line
4. EX
5. GT
With its 147-horsepower 2.0-liter inline four-cylinder (I4) engine and a six-speed manual transmission, this 2021 Kia vehicle has enough to take you around on your daily commute while supplying gear-shifting excitement. However, if you go with the GT—the performance-oriented one of the bunch—the 2.0-liter engine is swapped for a leaner-but-meaner 1.6-liter turbo four-cylinder for an output of 201 horsepower. In addition, the GT provides the option of the six-speed manual and a seven-speed dual-clutch transmission. A continuously variable transmission, which enables peak fuel economy numbers on the 2021 Forte (at 31/41 mpg, excellent for the class), goes on the LXS, GT-Line, and EX for a gearless—and thus, less energy-consuming—operation. Inside the cabin—which can be accessed using the car’s remote keyless entry system—are two rows of woven cloth-trimmed seats for up to five people, and the trunk opens to provide one of the largest cargo holds in its class (at 15.3 cubic feet). The infotainment interface consists of an 8-inch touchscreen, which brings together features such as the following:
• Four speakers
• AM/FM radio tuner
• Bluetooth wireless technology for hands-free phone calling and audio streaming
• Android Auto and Apple CarPlay smartphone integration
• One USB port and one audio jack for hooking up mobile devices
The new Forte has a ton of driver safety aids, which include the following:
• Rearview camera
• Cruise control
• Forward collision warning
• Lane departure warning
• Lane keeping assist
• Driver attention warning
If there’s a crash, however, the Forte can deploy any of its six airbags to provide protection.

Upgrading from the base FE model opens up the Forte to several additions and enhancements.
LXS: At this trim level, the ample cargo space can be maximized due to Kia introducing split-folding ability on the rear seats. In addition, the urethane steering wheel gives way to a leather-wrapped flat-bottom one for a sportier feel, and a trio of driver-assistance technologies—lane change assist, blind-spot monitoring, and rear cross-traffic alert—are added.
GT-Line: The GT-Line is not only the Forte’s mid-level trim, but also the point where the car goes further into racing-style territory. Instead of woven cloth seat material, the GT-Line has cloth-and-synthetic leather seats with white contrast stitching. Access and engine starting is made more convenient, thanks to its proximity keyless entry and push-button engine start, respectively. Kia adds two speakers to give the Forte a richer, fuller sound.
EX: The EX gets the bulk of upper-level trim upgrades. Here, cloth and synthetic leather give way to full synthetic leather seat trim, and seating and driving accommodations are made more luxury-oriented with a leather-wrapped steering wheel, front-seat heating and cooling, and 10-way power adjustability on the driver’s seat. Automatic climate controls are added on the front passenger side (in addition to the driver side). For infotainment, the EX comes with the following upgrades:
• Eight-speaker 320-watt Harman Kardon audio system
• HD Radio
• Navigation system
• Two USB ports for charging mobile devices
• A trial subscription to SiriusXM Radio
GT: As the top-of-the-line, performance-optimized model, the GT not only has the previously mentioned turbo-four engine, but also has a standard dual-clutch transmission for smooth shifts. The red contrast stitching completes the unique features at this trim level. Note that it has the flat-bottom steering wheel of the LXS and the six-speaker stereo system and cloth-and-synthetic leather seats of the GT-Line.